The coordinate system is as follows 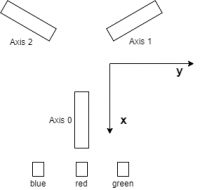 Orientation of the axis


The figure below shows the complete control system for our delta roboter.

If the HAL is configured correctly, we get the current position in radian of each encoder. Next, the Mux collects the three encoder values and puts them into an AxisVector. AxisVector is defined as

The mouse delivers a signal with four dimensions. As we do not use the fourth dimension (additional wheel would be necessary) we have to reduce the mouse signal to three dimensions with a special block. At the same time this block swaps x and y axis in order to adapt to the axis setup of the robot.

The Direct Kinematic converts the position of the motors into cartesian coordinates of the TCP (target center point). The output now contains the x, y, z value of the TCP.

Now we switch to the left of the diagram. We have three possible sources for the setpoint.

You have to make sure, that the path planner delivers a path with a acceleration and velocity which can in fact be achieved by the robot. If not, the arm might move in unpredictable ways. That is, moving from e.g. 0/5 to 5/5 must be made in a straight line.

The “Motor Model” gets the actual speed and the calculated torque as input, and outputs the desired voltage for each motor.
The “voltageSetPoint” serves for the initializing of the encoder. This block is no longer used after reaching Safety Level “systemReady”.

The drive signals to the motor are of type PeripheralOutput. They are described in the HAL as well.

Except where otherwise noted, content on this wiki is licensed under the following license: CC Attribution-Share Alike 4.0 International